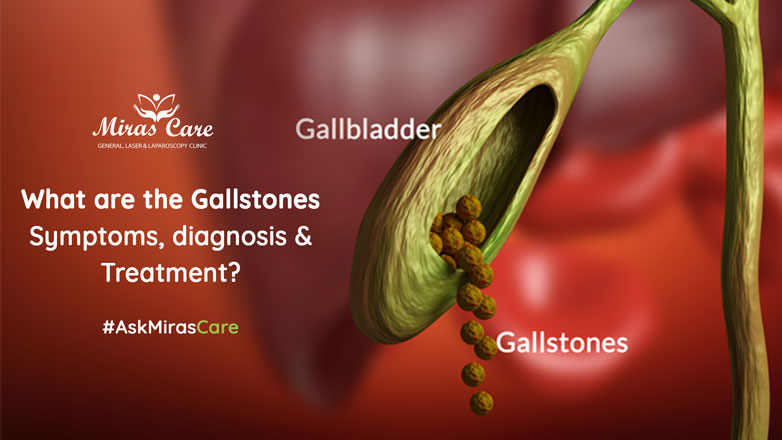 The digestive system comprises of a certain set of organs and chemicals that secrete enzymes to carry out the entire process. GallBladder Symptoms is such an organ that stores a chemical called bile juice. During the process of digestion, the gall bladder contracts and empties it into the small intestine. Bile juice helps with the digestion of fat present in the consumed food.

Gallstones, also known as Cholelithiasis in the medical world, are hardened deposits of bile present in the gall bladder. This happens mainly due to two reasons – either the gall bladder cannot get emptied properly or there is too much cholesterol in the bile juice. This is a disease that needs to be detected and be dealt with as soon as possible.

What are the Causes?

Stones in the gall bladder can form when there is a chemical imbalance. This happens when the chemicals -calcium carbonate, bilirubin, and cholesterol – are present in disproportionate amounts. Medical experts have not been able to single out a cause as to why some people develop gallstones when this chemical imbalance occurs while others do not. However, it has been seen that gallstones Symptoms are more common in people with obesity.

There are two categories of gallstones, mainly:

The presence of stones in the gall bladder can block the pathway of digestive juices flowing to the pancreas. This can, in turn, cause jaundice or acute pancreatitis which would just add on to the suffering and pain of the patient.

Gallstones Symptoms are very common today, owing to our food habits. All of us should be careful to not be a victim of this disease. However, some people are more likely to suffer from gallstones than others, as has been reported by medical professionals.

Women who have been pregnant or are taking oral contraceptives or undergoing high dose estrogen therapies are more susceptible to gallstones. Family history and genetics, too, play a key role in determining if you can be affected by this disease. Losing weight rapidly and regaining may also increase your chances of falling prey to this disease. People taking cholesterol-lowering drugs or women undergoing Hormone Replacement Therapy during menopause are also prone. Going through a lot of stress might also lead to the development of stones in the gallbladder.

What are the Symptoms?

Medical experts have determined a few symptoms that might suggest the presence of stones in the gall bladder. Some of them are as follows:

Other Symptoms of Gallstones have been Identified Below:

It is best advised that whenever you face the aforementioned symptoms, you get yourself checked. Doctors, more often than not, find gallstones while testing or treating for some other medical condition. The presence of stones in the gall bladder can be detected by testing for cholesterol, ultrasound, blood test, or during X-rays. Gallstones vary in size and quantity. This, at times, makes it difficult for them to be detected as they do not show any symptoms.

What are the Treatment options?

Usually, when gallstones Symptoms occur, they need to be surgically removed by a medical professional after thorough medical analysis. This occurs only when the stones have caused inflammation in the gall bladder or have blocked the ducts or have displaced the tubes in the intestine. Following are some of the medical processes by which gallstones can be treated:

After the surgical removal of the gall bladder, the liver becomes responsible for the production of bile juice. It is not that a person cannot live without his or her gallbladder Symptoms but some discomforts may arise when it comes to excretion. This occurs because the bile juice, after removal of the gall bladder, flows into the small intestine more frequently. Maintaining a balanced diet, eating a lot of fruits and vegetables, and drinking lots of water can help reduce the chances of formation of gallstones.

All you need to know about GallBladder Stone Surgeries

Can Gallstone cause Cancer?